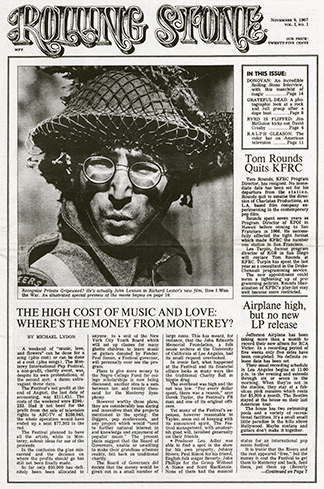 ROLLING STONE: JUST ANOTHER SYMPTOM OF THE END

While this podcast often plays devil’s advocate and takes the over-bloated philosophy that rock is dead more seriously than most, we acknowledge the fact that there is plenty of rock music out there. Yet, we maintain our position that rock as we once knew it…is in fact over, much like an historical or artistic period. Think Romanticism, Impressionism, or the Blaue Reiter period in terms of artistic movements. Historical periods and artistic movements do not have a very long life expectancy. Half a century may seem a long time, but in the scope of history, it really is nothing. And so it is perfectly okay to accept that even staples of our own lifetime will be bracketed and encapsulated into it’s own historical time period. I am specifically referring to the Rock Era, roughly 1954-1994. I will not argue with anyone who wants to tack on a few more years on the 90s end, but you will be met with fire and hostility if you try to tell me rock is just as vital and relevant today as it ever was. What with the decline of electric guitar sales sending music stores and manufacturers into a panic, along with the fact that kids aren’t even listening to rock enough to take an interest in picking up a guitar in the first place…that alone is testament to the fact that mainstream culture no longer revolves around rock.

The latest news is further testament. We now know that Jann Wenner along with his son Gus Wenner are putting Rolling Stone magazine up for sale. Largely the bible of rock and roll as well as pop culture for at least half of the publication’s existence, it was the weekly handbook that reinforced the Baby Boomer belief that the world begins and ends with their own generation. In terms of rock as the zeitgeist, they were absolutely 100 fucking percent correct. But yes…we know there is rock music out there. We hear about it all the time. Unfortunately if it’s not in a club or your neighbor’s garage, you’ll have to wait til next summer, when just like those yearly annoying movie trailers that promise “feel good” hits to help you remember the good times, your social media newsfeeds will be hopping with ads that read: ROCK…COMING TO A FESTIVAL NEAR YOU.

Rolling Stone is yet another symptom of the end of rock’s role as the center of pop culture…the end of a world where rock reflected the times better than any medium in art, informed politics and vice versa, as well as fashion trends. In short, it was by far the dominant influence to four generations of kids the same way kids are informed by hip hop, video games, and duck face selfies today. The decline in Rolling Stone’s relevance in the past 2 1/2 decades completely parallels the decline in rock’s dominant presence. Rolling Stone kept up (rather ineffectively) with pop culture trends since then, but they forgot about rock. It’s not that they were really a rock publication. They were a pop culture publication that often took it upon themselves to dictate what was valid and what was not. But the fact that they were rock-centric for the better part of 40 of their 50 years is further evidence of rock’s one-time empire throughout changing cultural trends prior to the 21st Century.

Perhaps they decided decades before anyone else that it was over, and that the only things worth continuing to acknowledge are the dinosaurs. While I completely agree with that belief in terms of the quality of music between 1954 to the early 90s, they could have done more to try cultivating rock as an ongoing entity…even in the face of mainstream realities of the past 20 years. Oh well. I’m still here and I’m not for sale. At least not yet. The only thing I know how to do now, is to keep on keeping on…like a bird that flew.