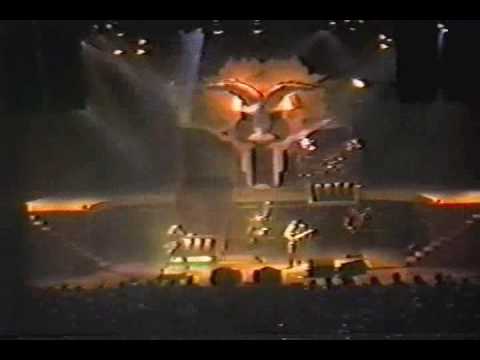 What debaucherous creatures we were as metal heads in the 80s. One need not look past the best possible firsthand documentation of that era, Heavy Metal Parking Lot, the cult classic short capturing the fucked up teen offspring of the Baby Boomers in all their hairsprayed and zebra-striped glory. It’s the last evening of May 1986 in Landover, Maryland and a crowd of stoned, drunk, and coke-fueled kids are partying outside the Capitol Centre before a Judas Priest concert. There is that ever-present sense of danger underneath all of the fun metal posturing of the kids that always silently accompanied metal shows in the 80s …that intangible element of something that could possibly snap and go wrong at any minute, leaving the entire evening to fall to shit.
But it doesn’t happen.
Instead, there is a sense of unity. These metal heads are proud. They are defenders of the faith. They know the language and the mannerisms. They wear the uniform and adhere to its code. One kid declares that punk rock has no place in the world and belongs “on fuckin’ Mars.” That’s about as hostile as things get.

But just a few hundred miles up 95 along the Northeast corridor of concert venues, things tend to fall to shit.

Rewind to two years earlier. It was right around this time of year on June 18, 1984 when Judas Priest took the stage of New York City’s Madison Square Garden under the watchful eye of the Metallian… that two-horned metal monster, half beast, half tank that occupied and inhabited the dark and dreary environment from which the band plowed through their 20-song set. The set wasn’t unlike most other Priest shows on that tour. The only thing noticeably different was the heightened sense of tension due to a magnified ferocity in the crowd and a large number of M-80s being thrown. Firecracker incidents have often been common in rock audiences, but this night was a bit excessive for one’s nerves. Almost none of the explosions we hear in the bootleg tapes of this show come from the stage, and there was probably more pyro coming from the crowd than there was from Priest. But that’s not what got them banned from the Garden.

It started during the three-song encore with one kid ripping the Styrofoam cushion out of his seat and flinging it like a Frisbee toward the stage. Then there was a second and a third. Within two minutes a barrage of seat cushions were flying at the stage from all directions. One fan with floor seats close to the soundboard suggested that looking up into the vast darkness of the Garden and seeing its empty space filled with flying objects was akin to literally being inside a video game war. As someone in attendance, also with floor seats, this writer agrees with that description. Following “Living After Midnight,” lead vocalist, Rob Halford rode his Harley Davidson onto the stage as he does every night, and the band launched into “Hell Bent For Leather.” By song’s end, seat cushions covering the stage were up to the bike’s handlebars. The Priest quickly went into a faster-than-usual version of “You’ve Got Another Thing Comin,” and got the hell out of there. And suddenly it was all over.

And that’s the part that gets greatly exaggerated.

A publication that shall go nameless ran an article in 2015 suggesting that the evening amounted to a riot that began before the show started as a result of a local disc jockey reading off a list of upcoming shows. It painted a picture of the DJ’s own account of being pelted with beer bottles, firecrackers, and M-80s by the angry fans that booed and erupted violently just at the very mention of some uncool acts coming to the Garden. While metal fans can be very unforgiving toward anything that’s not metal, nothing resembling a riot occurred while said DJ was on the stage. Photographer Bob Leaf who was in the pit that night and captured the only known post-concert images agrees that too much significance is assigned by the publication’s article to the role of the DJ. “He’s full of crap,” Leaf said over the phone on the eve of the show’s 34th anniversary. “I wrote to him but he never responded.” Leaf also addressed the exaggerated story with the publication’s editor, who he never heard back from either. The DJ, in fact, played no role in the progression of the evening. Indeed there was booing. Upcoming shows by non-metal artists were also booed at a Meadowlands gig a few months earlier, and nothing happened then either except for a Priest concert. What did happen at the Garden very late in the show, was $250,000 worth of damage that was done in less than ten minutes. Make no mistake…the flying cushions (some set on fire), and in some cases entire seats, along with the continuous stream of firecrackers and M-80s during the encore was frightening for many, and obviously dangerous. But it happened quickly and had nothing to do with some inconsequential pre-show announcements from two hours earlier. Priest picked up the tab for the damage and was swiftly banned from playing the Garden for basically the rest of eternity.

While far worse disasters have occurred at concerts in the form of actual riots, stampedes, and deaths, deliberate acts of vandalism that came on the heels of Priest’s 1984 Garden show briefly became part of the metal concert-going experience in the New York / New Jersey area. Seats were also slashed during a Kiss concert at the Garden in December 1985, as well as another Priest gig at the Meadowlands in June 1986, just six days after the show featured in Heavy Metal Parking Lot. On this particular night, seats were torn apart and in some cases ripped out completely. Immediately following the show as fans made their way through the parking lot, damage was done to the footbridge connecting two sides of the Meadowlands sports complex when sections of the walls were pounded and kicked in, and floorboards stomped out. Nine months later at the Meadowlands, fans turned over cars in the parking lot and torched two of them after an Iron Maiden show.

Remarkably, the short-lived period of copy cat vandalism was exclusive to the tri-state area and never spread throughout the country. Perhaps we owe that to a pre-Internet world where news traveled slow and local and regional incidents didn’t make it too far past the scene of the crime. And although every town and venue at some point has some sort of shit go down, the possibility of a nationwide trend never transpired. 34 years later, an argument is made that these metal fans have entered the geriatric stage of life and have learned how to behave themselves, and there is now an on-going effort led by fans through petition to lift the ban and allow Judas Priest to get themselves back to the Garden.