Madison Square Garden, often known as the world’s most famous arena has been associated with New York City for well over a century. The “world’s most famous arena”, however, is much more synonymous with the venue that turned 50 this year. The Garden had previously existed as two other structures. The first location, opening in 1879, was at the corner of Madison Avenue and East 26th Street, an area still known today as Madison Square. The second Garden which opened in 1890 was located up Eighth Avenue at 50th Street.

The current Garden under construction in 1967

The venue we all know today where the Rangers, Knicks, and Billy Joel remain as franchises and some of the most legendary concerts have taken place is actually the third Madison Square Garden. And as beloved and monumental as the place is to sports and music fans, its very existence has been a tragedy to those who can remember the circumstances under which the current Garden was born under. Ground was broken for the new venue very soon after the destruction of the Beaux-Arts treasure that existed on the same location for just 53 years. That building was the original Pennsylvania Station, not to be confused with the current station that runs underneath the Garden today. The old Penn Station was architectural brilliance…a celebrated work of masterful design, enormous space, Doric columns, grand staircases, and granite eagles and angels ornamenting the façade, serving as a welcome into New York City worthy of the gods. It stood east to west between Seventh and Eighth Avenues, and north to south between 31st and 33rd Streets from 1910 to 1963.

In 1961, the ailing Pennsylvania Railroad announced plans to sell the above-ground portion of its station in New York City, demolish the magnificent structure, and replace it with a glass tower and a sports facility that would serve as the new Madison Square Garden. While there was some outrage at the time, most paid no attention to the coming end of their Penn Station. History was taken for granted. 50 years for many people seemed an untouchable eternity. It was something that was always there and always would be. And then one October day in 1963 came the wrecking ball, and over the course of the next two years the stone structure was slowly dismantled and dumped piece by piece into various odd places including the swamps of New Jersey’s Meadowlands, buried in the toxic landscape one could view from that stretch of the New Jersey Turnpike.

Anyone who has gone in and out of Manhattan by train in the 50- plus years since, has experienced the cold antiseptic look and feel of the current Penn Station…the harsh fluorescent lighting, bland cramped floor plan that spans across a run of establishments meant to distract boredom and consume time and money…newsstands, over-priced delis, Dunkin Donuts, Houlihans, and the obligatory handful of shops that cater to tourism with t-shirts, caps, coffee mugs, posters, pens, and 1001 other objects that read New York City. It couldn’t be further from what McKim, Mead, and White intended just over a century ago.

McKim, Mead, and White, the prominent architectural firm comprised of Charles McKim, William Mead, and Stanford White, thrived at the turn of the century. They were most noted for their impeccable work throughout New York City including but certainly not limited to the Judson Memorial Church, Washington Arch, Villard Houses, Low Memorial Library, and ironically, the second Madison Square Garden. Stanford White whose name continued to be part of the firm, was actually murdered in 1906 on the rooftop of the Garden by local millionaire Harry K. Thaw after he learned of an affair between White and his wife, actress Evelyn Nesbit. The murder resulted in one of the most talked-about incidents of the early part of the 20th Century, and Thaw’s trial was referred to as the Trial of the Century long before Bronco chases and expert witnesses consumed our TV screens for months at a time. The scandal is portrayed in the 1981 film Ragtime, which featured a young Elizabeth McGovern who had an uncanny resemblance to Nesbit.

The Penn Station project was more McKim’s baby than anything. The architect had a tiny obsession with ancient Rome and the ancient baths, a building style lost with antiquity itself. And just as historians and artists have often attempted to piece together the architectural mysteries of the past with renderings of what things might have looked like (Think the Library of Alexandria in the first episode of Carl Sagan’s Cosmos series), McKim sought out to imagine what the Roman baths might have actually looked like, using what limited known information was available, as his guide. While he studied the Baths of Titus, Diocletian, and Constantine, it was the Baths of Caracalla that served as the main model for Penn Station’s interior…McKim bringing classical art into modern times in his timeless masterpiece.

In Triumvirate, Mosette Broderick’s sprawling account of the works of McKim, Mead, and White, Broderick illuminates the mental vision of the cavernous interior:

“McKim’s great Roman spaces alternated with the concourse…the soaring spaces were capped by a huge latticework of great glass roofs of varied shapes, supported by a network of steel columns. The crisscrossings of metal and glass made a structure remembered forever by anyone who walked within the space. The greater glass room was not a copy of the traditional shed, but an almost futuristic version of the bones of the building with light pouring through the glass panes.”

Rome however, wasn’t the only source of influence. The famous pedestrian “bridge of sights” was inspired by stations built in France and Germany that followed the Venetian model, while the horizontal exterior colonnade was based on Bernini’s curved Piazza at St. Peter’s. In his later years, McKim had a fascination with 18th and 19th Century English architecture and was equally inspired by John Soane’s Bank of England.

Of the loss of Penn Station, longtime architecture writer and critic Ada Louise Huxtable said, “Not that Penn Station is the Parthenon, but it might as well be because we can never again afford a nine-acre structure of superbly detailed travertine, any more than we could build one of solid gold. It is a monument to the lost art of magnificent construction, other values aside.” 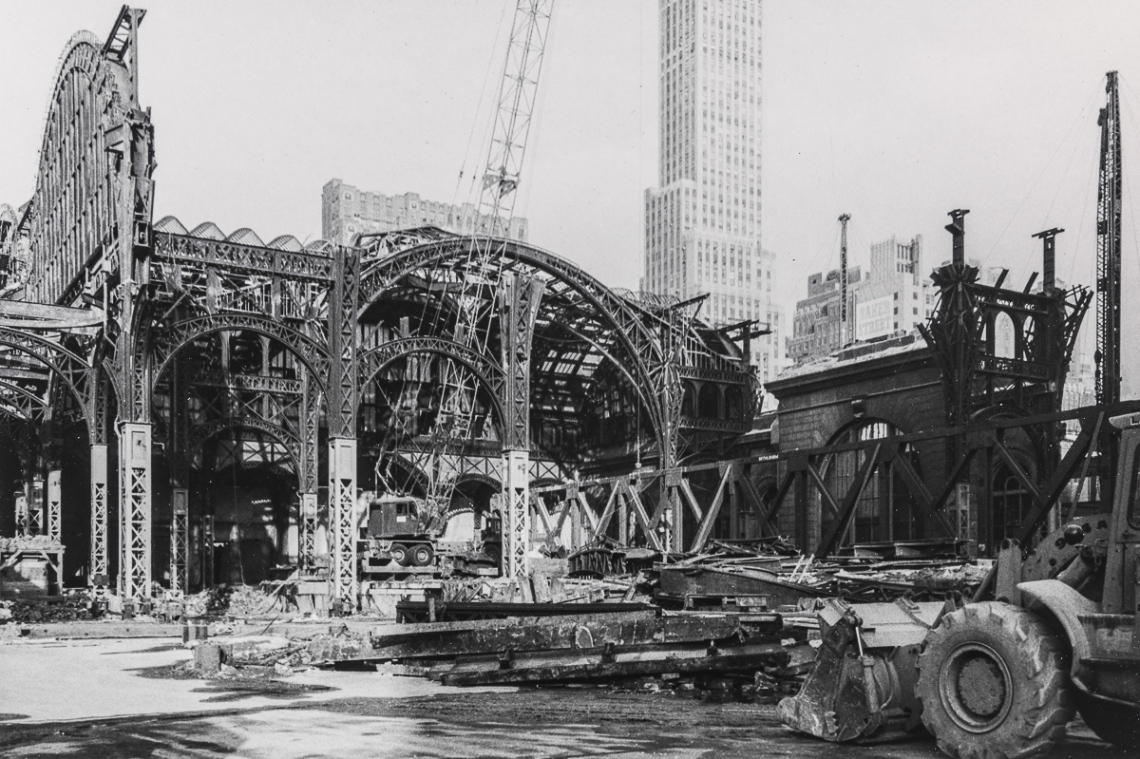 The destruction of Penn Station was what many referred to as a monumental act of vandalism to one of the great architectural wonders in U.S. history, and certainly the greatest architectural crime ever committed in New York City. That seems to be the consensus among architects, historians, and civic leaders. Yet, at the time, the only value some could see of the building was in its real estate. New York City has always been about real estate and change, and seemingly has not valued its most precious architectural masterworks. Similarly, in 1968, the irreplaceable Singer Building was lost to the need for more office floor space. And so, artistic aesthetics lost out to practicality, and Ernest Flagg’s unique Beaux-Arts composition was replaced with a glass cereal box.

If anything good came out of the loss of the old Penn Station, it was the creation of New York City’s Landmarks Preservation Commission, designed to protect buildings that hold historical and cultural significance. Unfortunately, it took the ultimate architectural sacrifice before landmark preservation laws became a reality. In recent years, an effort has been put forth to turn the James Farley Post Office directly across Eighth Avenue into the next Penn Station. Sitting just across the street from Madison Square Garden, the post office (also a McKim, Mead, and White structure built in 1913 and preserved as a landmark) has access to the tracks, and is the closest building in New York City to remotely resemble the style of the original Penn. It is nowhere near the grandeur and splendor, but if it passes the multiple layers of bureaucratic nightmares, it could recapture or at least restore some of the glory, spectacle, and wonder of the old station, and more importantly, a lost New York that’s only been captured like anything else, in time and memory.

Mike Derrico is a freelance writer and host of the ROCK UNDER FIRE podcast as well as the brand new RETROSPEAK podcast, both available on iTunes and Youtube.